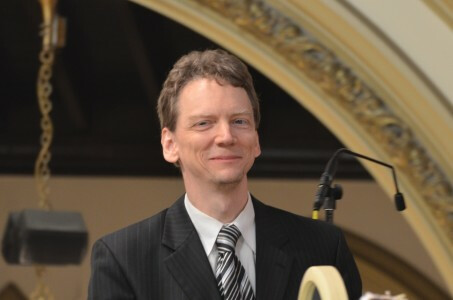 Peter was born in Evanston, Illinois. Both his parents were active as church organists and began teaching him organ at the age of five. As a boy in Evanston, he sang in the chorister programs at St. Luke's, and at age 14 began his first position as organist and choir director at St. Andrew's. later he was Director of Music at Resurrection Parish in Wayne, Illinois, which was administered by the Franciscans at that time. He later pursued formal keyboard, composition and musicology studies at Eastman School of Music. He relocated to Houston, Texas where he studied organ with Clyde Holloway and received a Bachelor of Music degree at Rice University's Shepard School of Music. While in Houston he served as Director of Music Ministries at Our Lady of Guadalupe and St. Frances de Sales parishes.

He earned his M.A. in music at New York University. He has performed as organist and directed choirs in various New York City area churches and took the position of Music Director at Holy Name in December 1998. Since his start at Holy Name, he has performed as organist in France and Germany. His compositions have been premiered in New York, Los Angeles and Beijing. He is married to composer Chien-Yin Chen and together they have a son named Ian-Pascal.