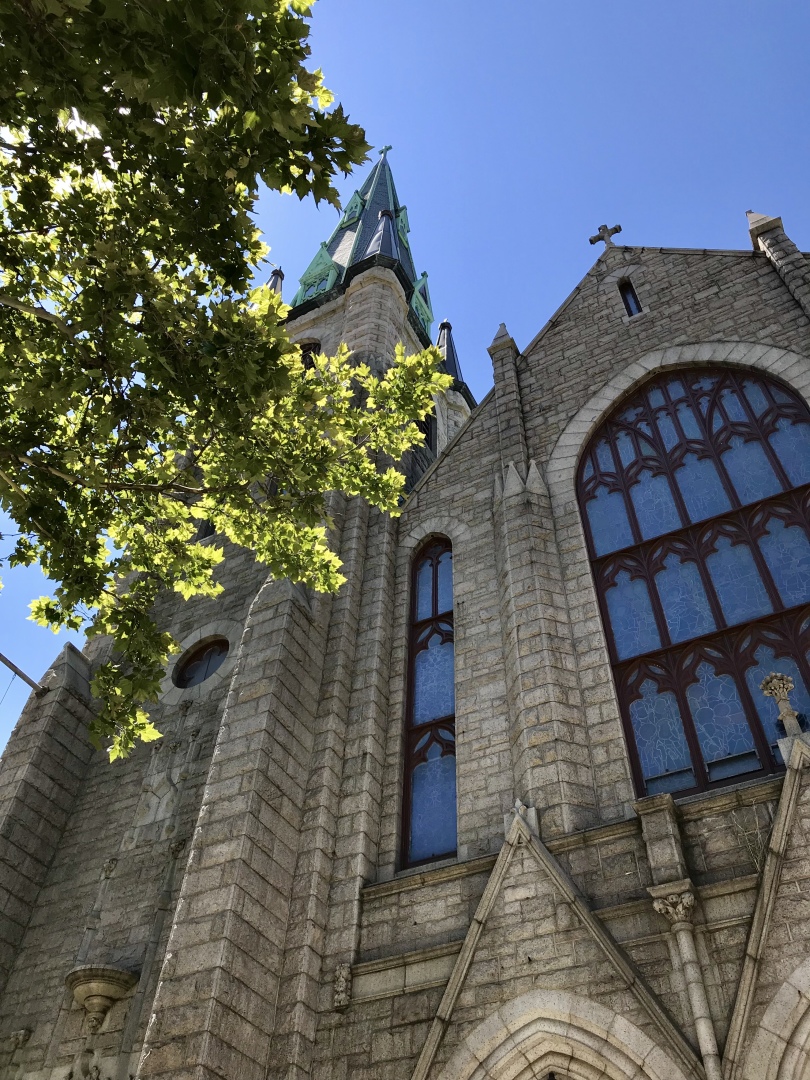 Click here for the Dedication of Holy Name of Jesus- Sunday, April 1, 1900

Click here for the Church of The Holy Name Calendar- November, 1912

The Church of the Holy Name came into being during an era of gas lights, horse-drawn carriages and post-Civil War adjustments. The United States had purchased Alaska in 1867 and New York City was host to the Democratic Convention of 1868.

That same year Father Richard Brennan rented a buggy and drove northward along Old Bloomingdale Road. Over his shoulder to the south, New York City slowly disappeared below the treetops, verdant in late July. In his pocket was a letter from Archbishop McCloskey introducing him to the Bloomingdale Roman Catholic Association as the pastor of their newly established parish in Bloomingdale Village.

In July, he began to superintend the building of the church, which was already in progress. Masses were celebrated in the new church on August 9, 1868, at 8:00 and 10:30 a.m., though the solemn dedication was deferred until a later date.

The new church was a plain wooden structure, about thirty-five by eighty feet, capable of accommodating five hundred people, and the cost of material and construction was about $3,000.

An event of tremendous importance in the parish was the solemn dedication of the new church to the service of God, under the title of the Holy Name of Jesus, on Sunday, September 20, 1868. The little church was crowded with a grateful congregation. The church was dedicated by Archbishop McCloskey.

The church was incorporated according to the laws of the State of New York on February 8, 1886, and its legal title as stated in the papers of incorporation was THE ROMAN CATHOLIC CHURCH OF THE HOLY NAME. The trustees named in the papers were the Most Reverend Michael A. Corrigan, Archbishop of New York; the Right Reverend William Quinn, Vicar General; the Reverend James M. Galligan; Henry Tone and John McLaughlin.

Early in the spring of 1891, the work of building the new church commenced. The stone and rock obstructions were removed and the foundation was laid. Soon the side walls were in place and the building was roofed over. Within a year, the basement of the new church was ready for occupancy.

On Sunday, March 20, 1892, the new building was solemnly blessed and dedicated by the Most Reverend Michael A. Corrigan, then Archbishop of New York.

The laying of the cornerstone for the upper church occurred on Sunday, April 17, 1898. The celebration commenced with a parade through the streets of the parish of all the societies connected with the church. The cornerstone was laid in place by the Most Reverend Michael A. Corrigan, Archbishop of New York, and the sermon was delivered by the Right Reverend Monsignor Joseph F. Mooney.

Early in 1902, Father Kean organized the Holy Name Catholic School Building Association. The weekly contributions of its numerous members provided the funds for the school. Accordingly, on Sunday,

October 16, 1904, the cornerstone of the new school, at the southwest corner of Amsterdam Avenue and 97th Street, was blessed and put in place by the Most Reverend John M. Farley, Archbishop of New York.

In just one year the school was completed at a cost of about $200,000, and was ready for occupancy. On Sunday, September 10, 1905, it was solemnly blessed and dedicated to the cause of Catholic education by Archbishop Farley. The Right Reverend Thomas Cusack, at the time Auxiliary Bishop of New York, made the principal address, dwelling upon the three great elements in the building of Christian life: the home, the church and the school.

Father Kean then secured the services of the Sisters of Charity for the new school, and in September, 1905, Sister Agnes Gertrude Corcoran was appointed Superior. The first Principal of the girls' department was Sister Mary Josephine Taaffe, who was later to become Mother General of the Community.

One of the most important changes to take place was the influx of Spanish-speaking Catholics who settled on the West Side after World War II. At this critical period in time Holy Name Parish asserted itself as a pioneer in its efforts to meet the religious and social needs of these newly arrived Americans.

More change was brought about in 1952 when the parish was decimated by the forced removal of thousands of its parishioners to make way for a proposed development called "Manhattan Town," to be located between 97th and 100th Streets, and from Amsterdam Avenue to Central Park. Most of these people were unable to relocate in the area, and, as a result, Holy Name sorrowfully said farewell to many of its most dedicated parishioners.

Again, in 1962, the parish was jolted by the passage of the West Side Urban Renewal Plan, and many more people in the area south of 97th Street, between Amsterdam and the Park, were slated for relocation. As before, many left the parish -never to return. In spite of these cataclysmic disturbances in the area, Holy Name endured this period of stress, and held itself erect in the whirlpool of shifting population and economic upheaval.

The Church of the Holy Name is still one of the most beautiful in New York City. The style of architecture is Gothic. It is built entirely of pink Milford granite, richly carved at the entrances and towers. The roof construction and ceiling are made of highly polished wood and have always been considered a marvel of artistic design and workmanship. The woodwork throughout the interior is fashioned from American quartered oak. The many columns supporting the roof have been designed in very light colors to provide contrast with the darker ceiling.

The five marble altars are of the richest design and skilled workmanship. The high altar, in the beautiful decorative style of Gothic architecture, is complete to the minutest details. The columns are made of onyx and add immeasurably to its artistic beauty. The carvings throughout display the workman's wonderful skill. The most notable of these carvings is the front panel of the Main Altar, which portrays the famous painting of the "Last Supper" by Leonardo da Vinci. Far above the Main Al tar, and easily visible to the congregation, is a beautiful painting of the Crucifixion. The Main Altar, and the two side altars within the sanctuary, were in place on the day of the dedication. The two altars in honor of the Sacred Heart and St. Ann, which are outside the altar railing, were installed a few years later. The steps and platforms of all the altars are of marble.

The stained-glass windows were carefully planned and executed. The large window over the main entrance represents the Adoration of the Holy Name of Jesus. It shows the Savior of the world, crowned and sitting on His throne, while He receives the adoration of all creation. All classes of individuals who have been honored by the Church with the title of Saint are here represented. In the south transept, the window represents the Presentation of the Blessed Virgin Mary in the Temple. The window of the north transept depicts the Apparition of the Sacred Heart to Blessed Margaret Mary Alacoque. The window nearest to the altar of the Blessed Virgin is dedicated to the Immaculate Conception, and that nearest to the altar of St. Joseph is a beautiful representation of the Death of St. Joseph. On the south side of the church, the windows describe events in the interior life of Our Divine Savior: The Annunciation, The Nativity, The Presentation of Our Lord in the Temple, Christ among the Doctors, and Jesus in the Carpenter Shop. On the north side, the windows represent scenes in the public life of Christ: The Baptism of Christ, Christ Blessing the Children, Mary Magdalen in the House of Simon, The Agony in the Garden, and The Handing Over of the Keys to St. Peter.

The Grand Organ which now majestically adorns the spacious choir loft of Holy Name Church is one of the largest - and considered by experts one of the finest - pipe-organs in the United States. Of its more than five thousand pipes (5,073 to be exact) only a few of the larger ones are visible in the organ case. The others, ranging in size down to the length of a pencil eraser, are arranged inside the twin organ case on four different levels in symmetrical rows. This organ was built in 1937 at the M. P. Moller Company factory in Hagerstown, Maryland.

In 1990 Holy Name Parish opened a new chapter in its history, when the Franciscans of Holy Name Province, seeking to expand their ministries in urban areas, were given responsibility for administering the parish by the Archdiocese of New York. The friars have brought a rich spirituality and vitality to the mission of this community shared through their warm, friendly and joyful spirit.

An early and important step was their renaissance of the Franciscan Community Center, following the Franciscan mandate to new and creative ways to serve the needs of the community- beyond the parish to the whole neighborhood.  The Center welcomes those of all races, creeds, or ethnic groups to a wide variety of programs, including Senior Services, Counseling Services and the Food Pantry.